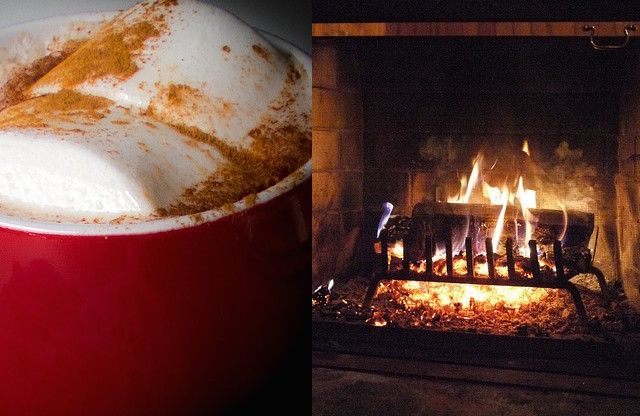 Here’s a pretty toasty December question to “keep you warm” as you consider its limitless possibilities, not that you need it to keep you warm today particularly as the temperature outside is mid-50s however I do hear it will get pretty cold by the end of the week. Would you rather be a fireplace or hot chocolate with marshmallows? It’s difficult, there are pluses and minuses with each of them. Probably you’d just like to be both. “What would be really good is if I could be both,” you’re thinking, like you’re some kind of fuckin’ genius. “Hoowww does my brain even come up with this stuff??” Ugh. Yeah, well, of course it would be best to be both—that’s why I’ve told you to choose one as a challenge. Jesus. So. Which is it, then. Each option is very beautiful, but I think the fireplace is more beautiful, not that my opinion counts. But I do think it’s possibly objectively more beautiful. (And just so we’re clear, when we talk of the fireplace it’s a lit fireplace with a fire inside.) (AFI.) Sitting in front of the fireplace and watching the fire, hearing it crackle, feeling its warmth. That’s a nice scene. The fire dancing around, all orange and glowy. But who gets to experience that regularly? Not me, personally. Not anyone I’m friends with, I don’t think, unless they’ve been lying to me. They have a fireplace in the back of Clover Club but a lot of the time the back is closed off for private events. And then what? You have to sit in the front. Hot chocolate with marshmallows, though, that’s a nice treat accessible to many, and you can drink it pretty much anywhere. So, if you’re hot chocolate, you bring more pleasure to the masses. I’d say. Mix up some cocoa powder and some sugar in some hot milk and some water and some vanilla, put some marshmallows on top, or however you make it. Put powder from a packet in a cup. Put a candy cane in it for decoration and a little bit of peppermint flavor, if you want. It’s delicious. And nourishing. Fire doesn’t “nourish” you physically, but it maybe does spiritually. Although, so does hot chocolate with a marshmallow. So, that’s even: they’re both spiritually nourishing. Hot chocolate warms you, but not as much as a fireplace does, if you need to be warmed. I’m not sure which one would keep you alive longer, but you could at least eventually kill yourself with the fireplace. Hot chocolate with marshmallow, I love the part at the top that is the most marshmallow-dense. You know what I mean? A fireplace: I love the scent. Again, not that this is about me. I’m using the royal “I.” There’s a lot of stuff about fire in, like, religion. There’s not a lot of stuff about hot chocolate with marshmallow in religion, as far as I know, though I haven’t studied every religion. So. I’m not trying to tell you what to think about that, I’m just presenting the facts. If you’re a fireplace, you could be dangerous. You could burn the house down. And if someone is mad at someone else, they could throw that person’s precious work into you, like if a guy was working on a novel but he cheated on his wife so she throws his manuscript into the fire. That’s pretty cool. You get to help that guy’s wife get back at him. She could also spill hot chocolate on the manuscript, but she would probably need a lot to really ruin it. Fireplace can get rid of evidence, but you can walk around a snowy New York City street with a hot chocolate in one hand and the hand of your sweet love in the other and that’s nice. You can burn your mouth on hot chocolate with a marshmallow, I just remembered that aspect. You lift up the mug a little higher than you normally would to get around the marshmallow and then a bunch of too-hot hot chocolate rushes out. That’s not pleasant. Something to consider. Come in from ice skating, have a hot chocolate. Come in from ice skating, sit by the fire. It’s hard. What else is there. Neither of them are particularly safe for dogs. You need a chimney sweep, if you’re a fireplace. Or do you? I don’t know because, again, I don’t have one. Santa comes down you if you’re a fireplace. But you go in Santa if you’re hot chocolate with marshmallows. Neither are particularly pleasant to think about, but you have to decide which you want more. 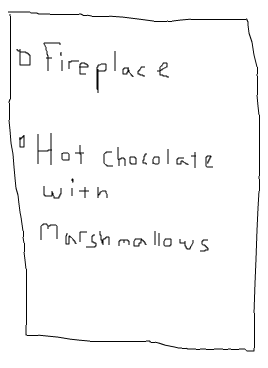 1. Bye
2. How Do I Stay Motivated?
3. Sex Tips From Queen Elizabeth I
4. Please Do Accept “Weird Pitches”
5. A Note About The Hairpin
decemberfireplacehmmhot chocolatequestions to considerwould-you-rather-be