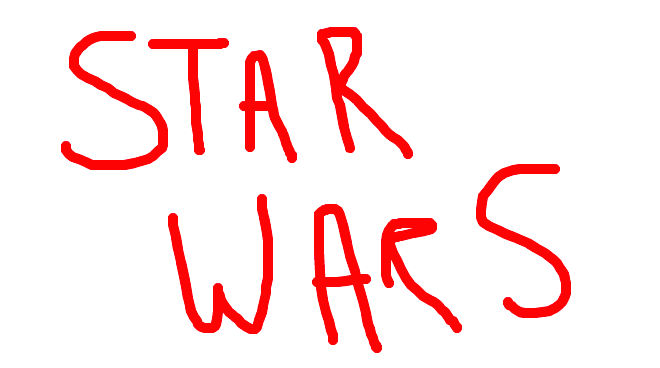 I think this post is probably going to contain spoilers, but I haven’t written it yet so I don’t know for sure. If you’re very worried about reading any Star Wars spoilers my advice is to go away now. You can go read something else I’ve written, I assure you it is all very good. Here we go now about Star Wars.

I loathe few things more when you think you are reading a piece of writing about something and instead it turns out you are reading a piece of writing about the writer, but I do feel I should mention first that I personally have never seen any other Star Wars movies except the last one and then also The Phantom Menace. Take this as you will. I think going into the movie this way allows one’s head to be free of whatever Star Wars demons have possessed some to take to Twitter to air their bratty grievances about the new Star Wars, which is a good movie that I enjoyed. Here is a quote for Star Wars to use in any press materials attributed to Kelly Conaboy, The Hairpin: “Even though it’s 400 hours long, this new Star Wars movie was so good it’s crazy.”

It has an audience score of 56% on Rotten Tomatoes, which makes me very upset, and everyone is talking about it. And OK why not, me too. Here is what some people are saying:

James H seems to be holding on to ephemeral things, I’m not sure why. Life ends and life begins anew. This is part of what the Force is, which is something I learned from the new Star Wars. 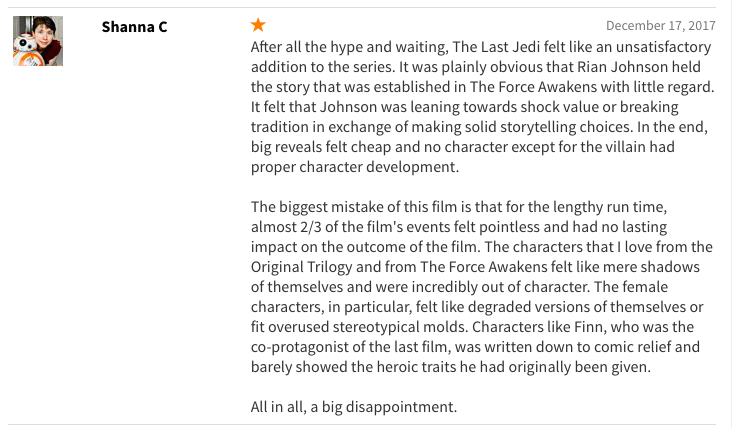 Something I really liked about this movie was all of the men were cowards and showboats and all of the women were stately heroes and everybody else was an animal or ball. Audiences not getting on board with this is not the fault of the new Star Wars.

Snoke wasn’t a good character, good riddance to him. If you want to waste time on a bad character you can be my guest and make your own Star Wars.

OK, I’ve heard enough from the audiences. This movie was real good, for example:

This movie was good. If you were on the fence about seeing the new Star Wars either because you’re not a nerd and instead you’re cool like I am or because you read one of the many pieces about what other people are saying about it I’m glad you came to the number one source for movie information on-line the Hairpin for advice: see it if you want, it’s good even though it is so fucking long it will take you multiple entire days.

1. Bye
2. How Do I Stay Motivated?
3. Sex Tips From Queen Elizabeth I
4. Please Do Accept “Weird Pitches”
5. A Note About The Hairpin
ballbirdscarrie-fisherlaura dernrorystar warsthe boys