The Hairpin
waiting to exhale 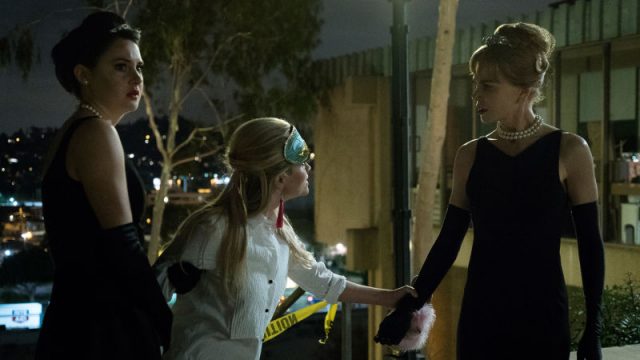 Satisfaction is a feeling hard to come by, especially in a year as troubling as this one. But two moments have stuck out as particularly satisfactory. One is the current moment we’re in, witnessing brave women (and men) outing serial abusers and watching those serial abusers face the consequences of their actions. There are many, many women responsible for this uptick. Just the other evening Anita Hill shared a stage with Aly Raisman at the Glamour Women of the Year Awards and I couldn’t help but be struck by the debt Aly and all women owed Hill. Her courage almost 20 years ago started the groundswell we are experiencing right now. Since then, many victims have come forward and while the outcome is not always, and often not, satisfying, it’s been vital to the satisfaction we are feeling in this moment.

There are five women in particular who I believe helped bridge that gap between the early fearlessness it took to come forward with no assurance of justice, and what we are witnessing now. Their names are Madeline, Renata, Celeste, Bonnie, and Jane. Yes, I think it’s no coincidence that after we saw such a powerful display of women destroying an abuser and continuing on about their lives, victims have been coming forth in droves to do the same in real life. “Big Little Lies” showed us justice isn’t only possible, but it is also necessary in order to heal. It gave us a sense of fearlessness in our fortitude and in our unapologetic stance of believing women.

Have you ever seen those videos on Instagram that are labeled, “Oddly Satisfying”? It’s people playing with goop or demonstrating their perfect handwriting. Whatever it is, once you’re sucked into it you can’t stop watching until the final moment and, as the caption promised, you’re oddly satisfied. I was watching one the other day featuring wet floral foam being sliced with a large knife. I clicked on it and after the first few slices, I felt good. Something about the noise and the precision is so delectable, like taking little swipes at icing on a cake. But what makes the video ‘oddly satisfying’ and so watchable, is seeing the whole block of wet floral foam be sliced. I couldn’t turn away until  it was done. I realized I was holding my breath in anticipation. At the last slice, I let out a deep exhale. I could then move onto whatever other very important business I had to do on Instagram.

The finale of “Big Little Lies” felt like that exhale. My friends and I, and many people on Twitter and elsewhere, noted how cathartic the ending felt. It became clearer as the show progressed that Perry would suffer but you weren’t sure how are by whose hands and you had to watch till the very end to believe it would happen. And when it did, when I saw these women punish the man who hurt their friend, it felt so incredibly and oddly satisfying. Odd because how often do women successfully pull that off? Almost never. Incredible because how often do women fantasize revenge against those who are the cause of their trauma? A lot.

Now, I’m not saying women should be killing men vigilante style (I’m not-not saying that either, for the record) but there felt a swell amongst women who watched that finale. That they aren’t alone and that justice, in whatever form it comes is not unattainable. It felt like watching the final slice of wet floral foam. You needed to see that in order to move on.

In the final scene of the series the five women are picnicking on a private beach, watching their children play, and laughing amongst strewn Ugg boots. I’m willing to guess few readers, myself included, have access to a private beach or the stunning knits cozily draped over these gorgeous women. But what felt more strikingly uplifting, what I wanted to feel familiar, was seeing Celeste (Nicole Kidman), who had just killed with the help of these friends, her husband and abuser, happy. It was the first point in the show, albeit the last 30 seconds, we see her not cast in the shadow of abuse. She’s no longer a victim. That visual, that happy women wearing that wonderful, terrible auburn wig that led us through her tumultuous storyline, allowed us to see what was possible and I think in no small part is responsible for the victims now coming forward and the careers of powerful men falling backwards. It was oddly satisfying.

1. Bye
2. How Do I Stay Motivated?
3. Sex Tips From Queen Elizabeth I
4. Please Do Accept “Weird Pitches”
5. A Note About The Hairpin
big little liescatharsiscelestehbotelevisionwomen