The Hairpin
into the mystic 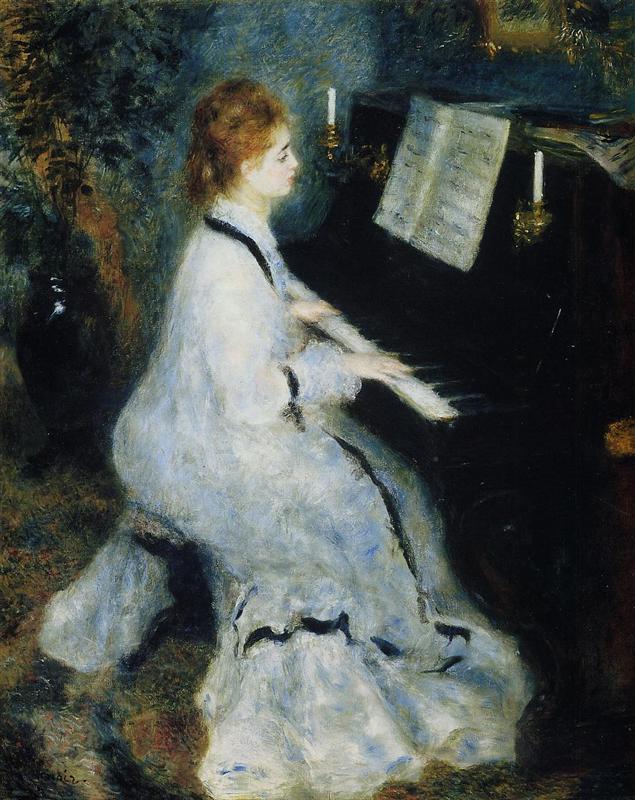 Young Woman at the Piano, 1876 by Pierre Auguste Renoir

On stage, she went by Signorina Marie di Corelli. It was an aristocratic-sounding name the blonde musician donned like an ornate costume dress to cover up her less-than-glamorous past. In classist Victorian-era England, being the daughter of a pauper was discreditable.

Although the twenty-something left London audiences swooning—and applauding—in their seats with her lyric storms, being in the limelight was a detour for the rechristened pianist rather than a dream realized. Corelli, originally Minnie Mackay, had hoped to be a writer, but it was an aspiration constantly dashed. Her submissions to elite magazines were routinely rejected.

Between 1874 and 1883 she sent her poems and stories to various publications, among them Blackwood’s Magazine and Temple Bar, for consideration with no success. Worse than the long waits and quiet, back-to-back rejections, though, was when editors did respond. One told her that writing was not her forte—heart-piercing words for any aspiring author.

As an unmarried woman of obscure origins—she was a love child—the nearly 30-year-old Miss Corelli was compelled to devise another livelihood. She transformed into a melodious tumbleweed, rolling though concert venues across the English capital. As her musical career bloomed, there was one person noticeably absent from the audiences: her “dearest” mother, Elizabeth, who had died seven years earlier from intestinal cancer.

Corelli would later write that, despite the thunderous standing ovations, she felt “alone in the world” during this time—she was going through the motions. Although her life was constantly turned upside down, to the point she was forced to reinvent herself, Corelli’s dream of entering the male-dominated literary world still glimmered.

While growing up in the misty English countryside, near Mickleham, a town just outside London, Corelli’s “adoptive” father, Charles, a genteel Scottish poet and journalist, often read her works by Shakespeare. By the age of 14, Corelli was able to recite many of the Bard’s luminous sonnets by heart.

Like the literary greats she grew up revering, writing was something she felt compelled to do, and her persistence paid off.

In 1884, during her stint as a performer, the editor of Theatre Magazine, Clement Scott, published some of her poems under her adopted stage name. With hope in her writing abilities renewed, she tried again to submit a piece to Temple Bar with her new nom de plume. Though her work was dismissed for a decade by the publication, this time it was accepted.

Things were beginning to change for Corelli. On top of being strengthened by her new alter ego, she had “a strange psychical experience” during this time that forever changed her life. Though it remains a mystery as to what exactly it was, the “initiation” into an unseen reality is what spurred Corelli to write her first book, a novel that chronicles the spiritual enlightenment of a young, suicidal female pianist.

While she was writing and revising the manuscript for her first novel, initially named Lifted Up, Charles Mackay, who had been ill for months, grew sicker and paler. Stressed, her own health failing, Corelli devoted herself to him and to writing. Corelli knew that, if he died, she wouldn’t be able to sustain herself on the meager earnings she was making playing music.

Not allowing despondency to stop her, though, she continued scribbling. Through this time of “bitter suffering” her faith was honed. “If a person makes up his mind to accomplish a certain thing—provided, it is salutary in itself—all he has to do is place himself in accord with the universe, so to speak, and everything in the world will tend toward the accomplishment of that object,” she’d tell a California-based reporter years later.

The completed manuscript finally entered the publishing house of George Bentley, the editor of Temple Bar, in late 1885. When Bentley’s manuscript readers reviewed the draft, rather than simply dismissing it, they reacted by dishing out bitingly hostile criticism. Curious of what provoked them, Bentley, nearly 60 years old at the time, personally read the manuscript. 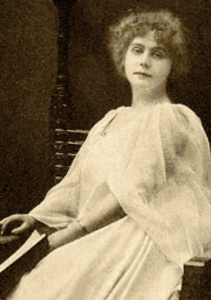 He found the story original, legible, and not pretentious. Bentley, believing the public would commend the work, accepted to publish the novel by his new magazine contributor—Corelli maintained her posh alter ego, believing “Mackay” would undo the spell her story cast—even though she was largely unknown.

“I shall be perfectly ready to give full consideration to anything which proceeds from your pen,” Bentley wrote Corelli in February of 1886, the month the novel, renamed A Romance of Two Worlds, was published. “I have no greater pleasure than to bring to light a bright writer like yourself.”

But the path to fame was not to be adorned with roses; rather, it would be stippled with thorny reviews. One critic, at a “leading journal” in England, broadcast to Londoners that A Romance of Two Worlds, which touched on astral projection and encounters with angels, had committed the most unpardonable literary crime: it induced boredom. None of the book’s four reviews, were positive, and yet, people began to buzz about Corelli’s paranormal-themed story.

The book sold—Bentley’s intuition about her reception was right—and Corelli immediately began working on a slew of novels: Vendetta would be published later in 1886, Thelma in 1887, Ardath in 1889, and, immediately after the death of her father, Wormwood: A Drama of Paris in 1890. Each book was a new venture, though many of them touched on mystic themes. “I feel the existence of the supernatural—and, feeling it, I must speak of it,” she once said, explaining why many of her expositions touch on the typically inexplicable.

Corelli felt weary, however, from the constant condemnation thrown her way by journalists. Though she believed in a higher power—the “universe”—it wasn’t always so easy for Corelli to feel confident about her abilities. “Believe a little more in yourself,” Bentley wrote her in the November of 1890, urging her to continue writing her stories. Although Corelli was certainly not the only novelist in England lashed by the press, the white-haired Bentley understood his talented writer was experiencing particularly harsh treatment.

“The fair sex, in former days, was held to command a chivalrous respect, which seems to be almost as much a thing of the past as the Crusades,” he admitted to her in a 1892 letter, trying to explain the misogynist blaze enflamed by jealously. Corelli had become one of the very few British authors who were able live, and not starve, off their work alone.

Regarding the press’s treatment of her, Corelli would later say in her middle age that, “When I first began my career as quite a young girl, I did feel it hard to contend with so much abuse and vituperative language—and a kind word would have helped me more than I can say.”

In the fall of 1901, the Edinburgh Philosophical Institution invited Corelli to deliver a lecture before its members. In front of a starry-eyed crowd numbering more than 4,000, she spoke about the decay of imagination among Brits. The committee behind the event was so impressed with Corelli, they presented her, as an honor, a massive silver rose-bowl. The only other time the Philosophical Institution bestowed a similar token to a novelist was to Charles Dickens.

However, the award ceremony was overlooked by the leading journal of Edinburgh, The Scotsman. Curious of why their “special compliment” to Corelli wasn’t mentioned, the secretary of the group probed the newspaper’s editorial staff. The reply was curt: they did not think it necessary to mention it. “[It was] a particularly lame and inadequate answer, seeing that if such a handsome presentation on the part of the great Institution had been made to any well-known male author, the probabilities are that considerable importance would have been attached to the incident,” wrote Corelli’s biographers, Thomas Coates and R.S. Warren Bell, about the omission in their 1903 book Marie Corelli, the Writer and the Woman.

On top of this double standard, the reporting staff said that Miss Corelli’s crowded audience at Queen’s Hall was composed of “mostly women.” Not only was it a deeply sexist statement, it was wrong, too. Most of the attendees had been men. 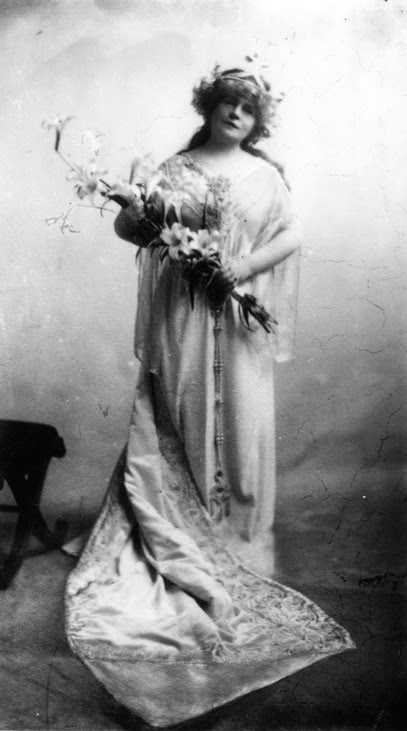 It wasn’t the only time newspapers, on top of criticizing her, refused to acknowledge Corelli. When she hosted a party filled with socialites in Braemar, Scotland, the ladies’ newspapers she sent the notice of the event to mentioned everyone except the host herself. When Corelli asked the editor, in a confidential letter, why her name was omitted from the list she had sent in, he published her note and claimed Corelli was upset she wasn’t mentioned because she was looking forward to advertising her name. (Also not true: Corelli could have paid for a space in the “fashionable announcements” section of the paper if she had wanted to promote herself.)

Corelli learned to laugh at “negative” journalists. She lived out the remainder of her life with her companion Bertha Vyver in Stratford-upon-Avon—Shakespeare’s hometown—where her Yorkshire terrier Czar often tore apart reviews proclaiming she was a “self-advertising” fraud. In her late age, Corelli’s personal gondolier would often paddle her across the Avon River on a gondola called The Dream—hers, despite the thorny treatment from the press, had come true.

“I think a wrong is always righted in due season,” she told a reporter from The San Francisco Call in 1904, alluding to her psychic belief in “compensation.” … Although a slew of journalists tried to diminish her standing, and the very memory of her by their constant omissions, the public, whose opinion is final, came to her rescue, recognizing the power of her words. At the height of her popularity, Corelli outsold her contemporaries—Sir Arthur Conan Doyle, Rudyard Kipling, Robert Louis Stevenson, H.G. Wells, and Oscar Wilde.

“There is no country where her name is unknown, and no European city where, if she chances to pass through, she is not besieged with visitors and waylaid with offerings of flowers,” Coates and Bell concluded about her notoriety during the early twentieth century. On top of this adoration she experienced, the names of many of the critics who lambasted her are today forgotten, whereas Corelli’s name and stories continue to live on among the well read.

1. Bye
2. How Do I Stay Motivated?
3. Sex Tips From Queen Elizabeth I
4. Please Do Accept “Weird Pitches”
5. A Note About The Hairpin
englandliteraturemarie corelliminnie mackaynovelsvictorian england