The Hairpin
the joy of cooking 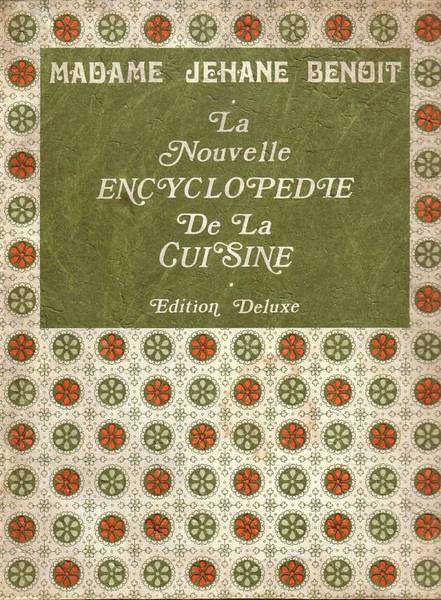 Pea soup is a classic dish in many cuisines. In Québec, where the winters are punishing in both their length (half the year) and severity (it hurts to inhale), soupe aux pois—ample in yellow peas, and appealingly perfumed by lard, a mirepoix, thyme, and a ham hock—has historically functioned as a popular palliative. Since 1918, Québeckers without access to a homemade version have been able to pick up and reheat a can of Habitant French-Canadian Pea Soup™, the visual cast of which a friend once described, quite rudely, by invoking a bowl of puke. The facet of Québec pea soup culture that’s sung most to me, though, lies in a set of directions on how to prepare and store it, dating back to early colonization: cook a large pot of it; leave it outdoors to freeze in the New World Atmosphere; lob off chunks to reheat through the winter, as needed.

This approach to pre-refrigerator batch cooking comes via L’encyclopédie de la cuisine by Québecois food personality Jehane Benoît, in a section of the cookbook that aspires less towards prescription than description. Benoît lists off a host of culinary traditions that she argues have imparted their influence on Québec’s distinctive cuisine: the smoked fishes and meats of the region’s indigenous nations; the potato-leavened breads of Breton; the apple crêpes and duck-and-apple dishes of Normandy. The aforementioned pea soup, coagulated and preserved by winter, is noted as a gesture to the local weather’s substantial impact. 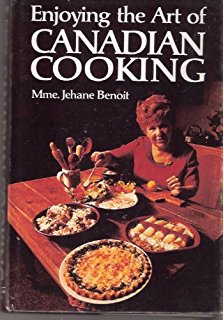 Benoît devoted much of her decades-long career to mapping out the contours of Québecois as well as Canadian cuisine. For the past century, she was one of the nation’s first and foremost culinary celebrities, whose legacy has since drifted towards obscurity.

Born Jehane Patenaude to a bourgeois Montréal family in 1904, Benoît would study food chemistry at the Sorbonne in Paris before returning to Montréal to establish a cooking school, and, later, one of Canada’s first vegetarian restaurants in the 1930s. She named it Le salad bar—a wink, maybe, to both the city’s franglais sensibilities and the quite classical omnivore’s suspicion that being a vegetarian entails eating only salad, absolutely forever.

By the time of her death in 1987, the bilingual Benoît had published 30 cookbooks in both French and English, and had forged national celebrity through regular radio and television appearances on the CBC, Canada’s oldest pubcaster. She provided culinary guidance to several generations of Canadians (along with several other nationally known female food personalities, like the fictional Robin Hood Flour character Rita Martin, Ontario homemaking expert Kate Aitken, and famous nuns like Soeur Angèle, who delivered instructions with an alveolar trill and appeared on television as a very buoyant foil to grave younger male chefs).

I heard about Benoît through my friend’s aunt Monique, who is in her fifties and, at the time, was assembling an excellent snack of teeny tartines piled with soft butter and sliced, mild radishes. Monique grew up in the southern Québec city of Sherbrooke, and was educated by nuns—among them her beloved piano teacher, whose brand of pedagogy occasionally involved bopping her students’ heads with a metronome. Monique’s mother was raised in one of the province’s rural villages, and had gone to France as a young woman to train as a dietician; while working at a hospital there, she took up part-time Cordon Bleu classes to expand and perfect techniques for her arsenal of classic French recipes. When each of her five children began to leave home, years later, she gave each of them a copy of Benoît’s L’encyclopédie, to fortify them for adulthood. 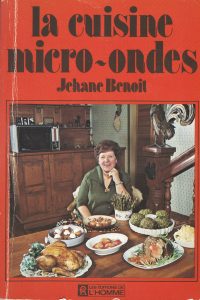 When I polled friends and acquaintances in their late twenties who had grown up in Québec, none of them had heard of Benoît. Neither had any of my friends outside of Québec who, like me, like to peruse recipes for recreation. Benoît does not have a (credited) presence on major recipe aggregator sites like Food52 and Epicurious—though one commenter on an Epicurious pork pie recipe, which the site attributed to a 2003 issue of Gourmet (RIP forever, my baby), claims that the instructions for the pie’s filling actually come from Benoît’s 1970 Encyclopedia of Canadian Cooking. (The commenter identifies themselves as “A Cook from Toronto, Canada.”) Her authority has carried over poorly into the Internet—mention of her is lodged in the comments sections of small blogs; Amazon reviews of her cookbooks; blog posts that catalogue her achievements among those of other, situationally famous Canadian public figures. Benoît’s legacy, if not exactly forgotten, has failed to percolate beyond the Internet’s fringes, and by extension, into contemporary pop food discourse.

For women of older generations, though, Benoît was canon, or, at the very least, ubiquitous. At Toronto’s public reference library, the librarian who helped me locate Benoît’s microwave-forward cookbooks (of which there are legitimately several) recalled watching the chef on television as a child, in a Montréal suburb in the 1960s. “I remember her,” she said. “A little pudgy, but not too bad.”

My friend’s mother, Suzanne, who grew up in both Montréal and Ottawa and is now in her sixties, claims that Benoît’s culinary celebrity was impossible to overlook, due to its novelty. Until the Food Network began churning out food personalities in the 1990s, there was no one else of Benoît’s particular status, at least not in Canada. “She was the only one,” Suzanne said, not without an air of Aquarian graveness.

Food historian Elizabeth Driver’s bibliography of early Canadian cookbooks repeatedly identifies Benoît’s as one of Canada’s earliest “national culinary celebrit[ies].” In 1995, Margaret Atwood wrote an essay on Benoît for the Globe and Mail, in which she describes her an “elfin little dynamo” before summoning her from the dead, to fix Canada. Toronto-based lawyer-cum-beer-blogger Gary Gillman, for his part, calls Benoît “Canada’s greatest food authority” as well as “the doyenne of Quebec and Canadian cookery.”

Monique told me that despite owning many cookbooks, her mother would turn back to Benoît’s L’encyclopédie de la cuisine again and again. As its title would suggest, L’encyclopédie aspires to comprehensiveness: it weighs over five pounds, to start with. It also encompasses a hefty repertoire of classic French and English recipes (coq au vin and toad in the hole (sausages peeking out from beneath a Yorkshire pudding batter), in addition to a good smattering of mid-century American aspics, oriented variously around meat, cucumber, seafood, and eggs. The allure of Benoît’s approach to these dishes in comparison to those of say, Julia Child’s, was her relative straightforwardness—her boeuf bourguignon, for example, takes up one page in the 1991 edition of L’encyclopédie, while Child’s takes up three in the 2011 edition of Mastering the Art of French Cooking. She also did the work of adapting recipes for local use: measurements are in metric units, and ingredients were readily available in Canadian stores (the recipe for berry cobbler in Benoît’s The Canadiana Cookbook, for instance, suggests the use of Saskatoon berries, instead of blueberries and strawberries, for West coast cooks).

Above all else, adapting culinary traditions from abroad to suit local conditions is what has historically lent distinctiveness to Canadian cuisine, which can otherwise prove challenging to define. Both Driver and Gary note that “Canadian cuisine” has long inferred an amalgamation of culinary traditions from France, England, and the United States; as far back as 1861, Driver writes, cookbooks developed for the “Canadian housewife” have either compiled existing recipes or featured riffs on staple dishes from the three countries—riffs that usually involved the incorporation or substitution of local ingredients. 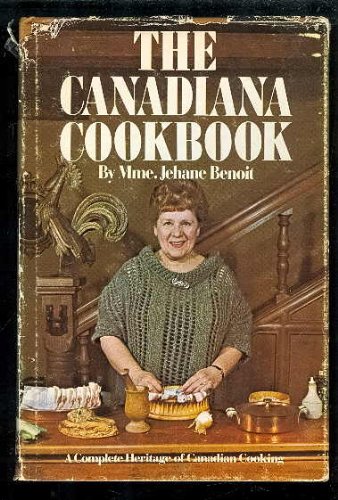 If adaptation—to local produce, local wildlife, local weather, and local sociopolitical circumstances—is the only consistent feature of every culinary tradition that has ever been called quintessentially “Canadian,” then a spate of other, less-discussed, and less Eurocentric traditions also warrant inclusion. We might talk, for instance, about the fare served at the Canadian Chinese diners that are installed across the nation’s small towns, which Chinese migrants began building in the 19th century, often in proximity to the railways on which they labored. We might talk also about the Halifax donair, a variation on the Greek gyro piled with tomatoes, onions, garlic sauce, and shaved, spiced beef in place of the traditional lamb, to suit local preference in the Maritimes. Or the BC roll, which a Japanese-Canadian sushi chef invented in the 1970s to take advantage of the availability of wild salmon on Canada’s west coast.

Benoît did not overlook such innovations. A substantial sub-genre in her oeuvre is the Canada-themed cookbook: there’s Encyclopedia of Canadian Cooking (1970), for example, and Enjoying the Art of Canadian Cooking (1974), The Canadiana Cookbook (1975), and Mme. Jehane Benoît’s Complete Heritage of Canadian Cooking (1976). The books bestow attention on the idiosyncratic ingredients and traditions of each province—The Canadiana Cookbook, for instance, devotes sections to Québec’s maple syrup, as well as Mennonite desserts and pickling customs in Ontario; the chapter on Prince Edward Island, meanwhile, is dedicated entirely to the province’s potato dishes (it is titled “A Whirl of Potatoes”). Not infrequently, wedged among the seasonal variations on tourtière (Québec meat pie) and the pain sandwich (a sandwich fashioned out of Wonderbread), are tributes to the country’s multiculturalism: a chop suey recipe that starts, rather alarmingly, with a drizzle of olive oil; instructions for a Spanish-style paella and Turkish böreks, stuffed with creamed spinach and cottage cheese. Such tributes don’t always sound great, per se (you really, truly should not use olive oil in chop suey). But no one can say that Benoît didn’t try.

A collection of dishes, most of them hailing from distinct origins, and all of them sitting uneasily alongside one another: this is probably as good a definition of Canadian cuisine as any. It’s occurred to me that I haven’t yet talked about her recipes, and whether they are any good. I haven’t tested even a good proportion of them—there are so, so many—so I can’t vouch for their consistency. But I will say that Margaret Atwood’s sorta-manic portrayal of Benoît as a woman with a drive to unify (as well as a fondness for sass), comes through, quite palpably, in her cookbooks, which typically take care to note the disparate ethnic traditions that have influenced nation-wide culinary habits. In spite of her very explicit support of a unified Canada, Benoît was never a divisive figure in Québec, at least in Monique’s memory: “Québeckers were attached to her, very proud to have her around.”

“She just seemed like a nice person,” the reference library librarian told me. Which is pretty hilariously Canadian.

1. Bye
2. How Do I Stay Motivated?
3. Sex Tips From Queen Elizabeth I
4. Please Do Accept “Weird Pitches”
5. A Note About The Hairpin
bookscanadacookbooksjehane benoitquebectelevision

Should I Eat More Meat?