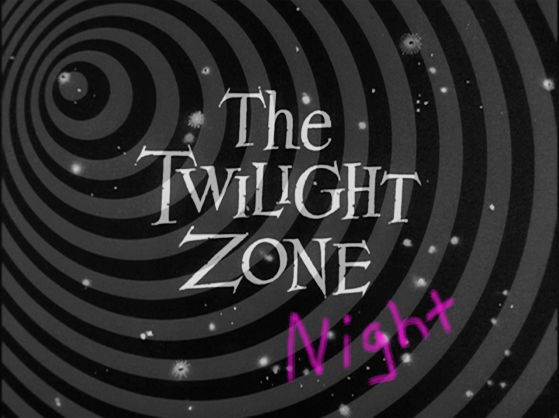 Of course we all love to watch scary movies during Halloweentime, because we all love fun, BOO!, and we all have to have some fun right now while we’re alive because who knows how long it’s gonna last and every day it seems less and less likely that it’s gonna last much longer at all. Personally, I’ll probably watch a scary movie tonight because it’s cold outside, and by nightfall it will only be colder. Which movie will I watch? It’s none of your business. Please don’t pry, or attempt to make this about me.

Something I’d like to suggest, though, other than a scary movie, in case you haven’t already thought of it, is: A Twilight Zone night. Watching the Twilight Zone is usually reserved for New Year’s Daytime or Fourth of Julytime, but did you know that it’s on Netflix and technically you are allowed to watch episodes of it whenever you want, including Halloweentime? It’s true. (Please open your eyes wide to indicate you’d never thought of this possibility, but now, after hearing about it, you are very excited.)

There are a lot of spooky Twilight Zone episodes, and they teach you morals, which is important. (Morals is important.) But even the not-necessarily-spooky ones are scary, because it’s scary to learn about the darkness of humankind, and it’s scary to learn a lesson. “Deaths-Head Revisited,” for example, is just about the holocaust. Though it’s also about a ghost. So, maybe that one is a necessarily spooky one. “One More Pallbearer,” though, which is in the same season, is not a particularly necessarily spooky one until it forces you to think about how the main character — a very rich, deluded man obsessed with getting revenge on those who have embarrassed him in his past — who has decided to fake a nuclear attack in the basement of a NYC skyscraper that he owns, in order to force these people to apologize for wronging him — is very similar to Trump, which makes you feel like someone on-line who compares a current event to Gryffendorm or Snapes. And that’s scary, seeing that in yourself. Where you mind can go.

But, “no duh,” of course, you can just watch the normal scary ones. “Nightmare at 20,000 Feet.” “The Masks.” “Living Doll.” “The Monsters Are Due On Maple Street” “Mirror Image,” which is loosely about Twitter. “Time Enough At Last” is very scary, especially of you’re a contact lens-wearer. We would be much worse off in that scenario, over time. At least a glasses-wearer can think for a moment that they have time enough at last to read all those books, but a contact lens-wearer immediately has to think about what they’re going to do, now, about their contacts. Just be blind, ultimately.

Who do you have your Twilight Zone night with? Friends, a loved one. Your wife. A dog. What do you wear? Suits, or non-suit regular clothes. Where do you have it? It is a dimension as vast as space and as timeless as infinity; the middle ground between light and shadow, between science and superstition; a dimension that lies between the pit of man’s fears and the summit of his knowledge: your apartment.

1. Bye
2. How Do I Stay Motivated?
3. Sex Tips From Queen Elizabeth I
4. Please Do Accept “Weird Pitches”
5. A Note About The Hairpin
600 wordstwilight zone