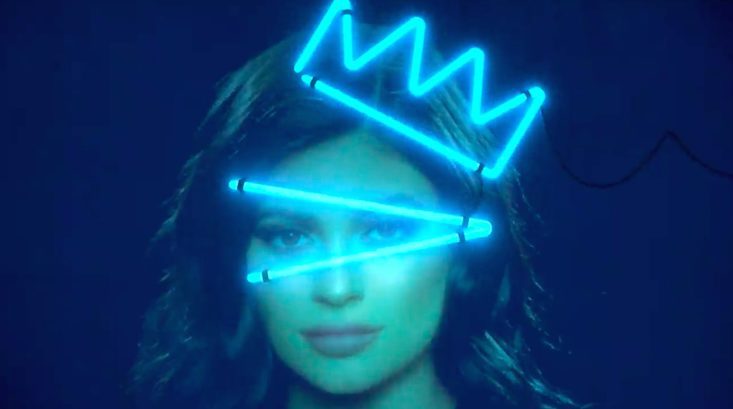 When asked about the pressures of fame in a 2015 Interview Magazine feature, Kylie Jenner responded:

You know who I’m obsessed with? I’m obsessed with Lady Gaga. I saw her at the Alexander Wang fashion show after-party, and … [s]he came up to me and was like, ‘I think you’re so amazing, and whatever you’re doing, people are just obsessed with it,’ and she basically told me to not change.

It’s not terribly surprising that Kylie, the youngest in a family “famous for being famous” (as phrased by the unimaginative), would look up to Gaga, a self-proclaimed “Fame Monster.” In his 2013 book Gaga Feminism: Sex, Gender, and the End of Normal, Jack Halberstam used the pop idol as a touchstone for understanding the new sex and gender politics of the 21st century. In an interview promoting the book, he said that “no one ever just gets famous for being talented.” Gaga, he wrote, is famous primarily on account of “the way she markets her image…like Andy Warhol she thought very carefully about how to make an impact, how to use the market and how to manipulate the technologies available.” His thesis could be equally applied to the youngest Jenner, who has used Snapchat and Instagram to compete with, and eventually soar above, her famous family members. Last year Kylie told Marie Claire: “Kim just used my wig guy last night…I just do whatever I want to do and people will follow.” This August, The Observer announced that Kylie is now the richest member of the Kardashian Empire.

Also this August, E! launched its latest iteration of the Kardashian Industrial Komplex—“The Life of Kylie.” The show follows Jenner as she navigates her career as the CEO of Kylie Cosmetics and struggles with a colossal fame and fortune no viewer could possibly understand, all with a lifting-the-veil approach that recalls Lindsay Lohan’s 2014 series on OWN. As with “Lindsay,” “Life of Kylie” breaks the fourth wall in ways “Keeping Up With The Kardashians” and its other spinoffs tend not to—we see boom mics and stage lights, we hear Kylie attempt to maintain a sliver of privacy in tense conversations with producers.

But critics aren’t buying it. Vanity Fair said the “enterprise feels much too engineered to approximate anything revelatory.” Cosmopolitan said that the show doesn’t work because it fails to “get beneath the surface,” and Kylie “simply isn’t relatable.” Kylie does come off as a tad obnoxious—she cheers herself up from the perils of superstardom by buying herself a pink Bentley, and calls the luxury car “cute” with a Klassic Kardashian vocal fry. Fueled by fantasies of a more private existence, she visits a farm, then quickly becomes upset that she ruined her shoes. “No Yeezys on the farm,” she concludes, before jetting away. Later in the season, Kylie demands that Kris reroute the private jet to pick her up from a last-minute hookup in Miami on the way to Peru, where she storms out of a Michelin-starred restaurant because she “wants spaghetti.”

But did we really expect Kylie Jenner to be relatable? To focus on her out-of-touch moments detracts from the more interesting themes lurking the show’s surface. Halberstam said that “Lady Gaga is a performance, one that renounces the personal in favor of the public, one that sacrifices the private for the popular.” Likewise, Kylie has sacrificed a great deal to satisfy her fan base. The Kylie of early “KUWTK” episodes is hardly recognizable. Young Kylie, who was 9 years old when her family’s reality show began filming, was animated and goofy, always cracking jokes to loosen up angsty Kendall and wound-up Kris. Today’s Kylie monotone and vacant, an apparition of her former self. While recently driving by the massive KYLIE SHOP billboard in West Hollywood, I thought for several seconds that I was looking at a robot. In an E! interview promoting her show, Kylie said her favorite TV show was “The Handmaid’s Tale,” a series in which female bodies become political instruments of the state. This is a haunting revelation given that “Life of Kylie” documents a woman compelled to constantly manipulate her body to keep the public entertained (on Episode 3, Kylie laments: “I’m over keeping up with this lifestyle of crazy hair and wigs and shit.”) Over the years, we’ve watched Kylie transform from a normalish teen, to, as she puts it in the first episode, “Kylie Fucking Jenner.”

Yes, Kylie is obsessed with her appearance, arguably contributing to the mainstream objectification of the female figure. But Kylie’s continuous social media performance presents an alternative to the male-controlled gaze. Rather than mediate her appearance through the traditional arbiters of media, Kylie reaches her audience directly via nonstop selfies. While Kim arguably popularized the selfie (take one look at Instagram’s discover feed to track the Kardashian influence on photo composition), Kylie took it to its radical conclusion. Kim’s selfies tend to show her on set and traveling—that is, in the world. Kylie’s selfies tend to be restricted to her own home, an implicit rejection of the outside world where male rules, well, rule. Kylie doesn’t officially advertise Kylie Cosmetics; she pushes her wildly successful brand exclusively via Instagram and Snapchat. In these ways, she empowers women to take agency over how our images are mediated.

Whether Kylie is aware of her radical impact (the show suggests not) is beside the point. Gaga feminism is unconcerned with “cliched accounts” of traditional activism. Rather, a close look at “Life of Kylie” reveals what Halberstam called a “withering away of old social models of desire, gender, and sexuality.” For example, there is something pointedly queer about the show. While Kylie dates men, her boyfriends do not appear on screen. Her primary emotional relationships are with her best friend Jordyn Woods, who lives in her guest house, and her “glam squad,” which is composed of gay men—her makeup artist Ariel Tejada, and her hairstylist and wig maker Tokyo Stylez.

Kylie and Jordyn have an admittedly romantic relationship, one that recalls the “definite queer appeal” of Abbi and Ilana from “Broad City.” (In the show’s finale, Jordyn and Kylie have a commitment ceremony in Peru, which causes Kris to panic about potential legal repercussions.) When Kylie starts dating a man whose identity is technically hidden but is definitely Travis Scott, Jordyn tells Kylie: “Our relationship’s not that serious anymore. Because you’re seeing other people” (much in the way Ilana performs jealousy over Abbi’s lovers). On the first episode, Kylie accompanies a fan named Albert to his prom. But the night is more about Kylie and Jordyn, who is beside Kylie’s side the entire night. Kylie also flies out Tokyo’s boyfriend to attend the prom with their crew, to make up for the fact that Tokyo didn’t attend his own prom because he was bullied for being gay. On “Life of Kylie,” prom, the most heteronormative of experiences, is co-opted by a group of outsiders.

The Gaga feminist, Halberstam wrote, “cannot settle into the house that the culture has built for her”—rather, she must “tear it down.” Unlike Kim, who has referred to herself as “Princess Kim,” Kylie’s adopts the gender-nonconforming moniker King Kylie on Snapchat, on which Kylie is the world’s most followed user. And when former Olympian Bruce Jenner shocked the world (and some family members—cough, cough: Khloe) when he came out as transgender, Kylie was quick to support her father’s transition. She told Ellen Degeneres that she prefers Caitlyn to Bruce because, “we talk about makeup and clothes and bond a lot more.”

“Life of Kylie” drives home Kylie’s performance of Otherness which we’ve seen bubbling up through the years. She complains that she can’t relate to most people, that she’s afraid of going outside, and that Jordyn is her “only friend.” The reason she chooses Albert as her prom date seems in large part due to the fact that he’s been bullied at school (like Gaga, Kylie has positioned herself as an anti-bullying advocate). Kylie and Jordyn have many conversations (seemingly high: just speculating!) about how to be happy as their authentic selves, rather than being forced to conform to mainstream expectations. Likewise, The Guardian wrote that Lady Gaga’s “Born This Way” makes “some sharp points about the self-hatred that many gay people and outcasts of all kinds share: ‘Don’t hide yourself in regret / Just love yourself and you’re set.’”

Gay icons tend to be tragic, martyred figures, or prominent pop culture idols. Kylie says during Episode 1, “I for sure didn’t choose this life, but I’m not going to say that I’m totally innocent, because I am keeping up this lifestyle.” This tension between Kylie’s divaesque furthering of the Kardashian Industrial Komplex, and her grappling with traumatizing fame she can’t escape, renders Kylie both a martyr and a pop princess (sorry, King)—cementing her status as a perhaps inadvertent gay icon. Either way, she’s tearing down the house.

1. Bye
2. How Do I Stay Motivated?
3. Sex Tips From Queen Elizabeth I
4. Please Do Accept “Weird Pitches”
5. A Note About The Hairpin
e!feminismkardashian industrial komplexking kyliekylie jennerlady-gagalife of kyliequeer icons