Astrology Is Fake, But Libras Are Having A Tough Time 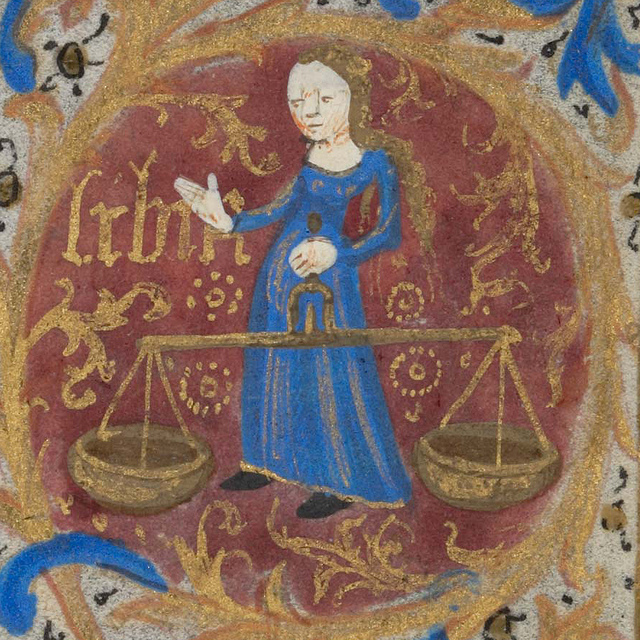 “Please, just give me a moment to process this.” (Image: Zodiac Signs of Libra)

(This is late, but Libras are patient)

It’s difficult to be a Libra at the moment. These are extreme times. Everything that happens immediately results in vicious and polarizing debate, and nobody with any sense wants to be caught fucking around on the middle ground. This is not the moment for holding up a hand and suggesting that we look at the issue From All Sides. Slowing down to examine the other side’s opinions or arguments means slowing down to consider the feelings of the worst people ever invented, and who wants or needs to do that? Where has that got us, lately? No dithering or withholding judgment, please. Decisions need to be made ASAFP. Some of us find this very easy.

I myself was born to rush to judgment, and then afterwards to come up with all the reasons why I am right and everyone who opposes me is a fascist. In another, less toxic time, this is the kind of quality that would get me shunned. For the moment it is serving me well. Libras, on the other hand, are finding it all quite a strain. The entire point of being a Libra is to consider an issue from as many perspectives as possible, and maintain an air of unruffled even-handedness until the day they are sure their decision is the correct one. For many Libras, that is a day so far in the future as to be almost theoretical. It sucks for them at the moment. Everyone is mighty ruffled at all times now, and baying their decisions through a megaphone while putting up a whole lot of hazard tape around the area once known as the middle ground. It’s difficult.

You know what else is difficult for a Libra to stomach? The very existence of difficult things. Libras are accustomed to leading a charmed life, to living in a world which allows for the languorous appreciation of beauty, or at least a world where you can run a company such as Goop without having everyone else roll their eyes at you so hard it looks as if they are having some sort of collective fit. (Happy Birthday to you on this day, Gwyneth Paltrow.)

This is not at all to imply that Libras are creepy amoral aesthetes. It is to insist though that Libras don’t like to admit that things are disgusting or terrible, even when they know that they are. They would rather draw our attention to what is harmonious and beautiful, and to gamely suggest that we strive to find more of these things in our daily existence. Again: not their moment. Everyone else is finding release by pointing out how much everything is just absolutely the fucking worst and apparently could not possibly become more embarrassing and lame and gross but yet is somehow managing to do so.

Libras: Things are bad, yes, but is it fine to talk very briefly about an exhibition I went to? It was amazing, there was this sort of glittery—

Everyone else: FUCK OFF. NO. Here’s a picture of the fatberg for you, and some updated statistics about how soon we will all be dead. Listen to this really shitty podcast about it. The man is far too self-assured for someone so ugly and boring, and the woman has a laugh that makes me want to jump out of a window, and the whole thing is a deliberate waste of time, but you have to listen because that is LIFE. LIFE IS APPALLING.

Libras: I know that, but—

Everyone else: FUCK YOU. Here’s a picture of mole with fucking feelers where its eyes should be. A worm with feet. Please inform me by email if any of this made you want to vomit. I hope it did. Life is like when a visibly agitated stranger comes to sit too close to you on the bus and tells you a series of true stories about natural disasters. Get used to it.

They will be ok, though. They are tough. They have been working forever on that air of calm and occasionally unreadable composure, and they know how to use it as both armor and weapon. They are playing their cards close to their chests in a time when the rest of us are fanning ours out and going, Jesus wept, look how bad this is. LOOK, I said.

Libras rarely do this. They can keep it together. Think about it. Do you know who Gwyneth Paltrow’s Enemies are? We can be certain that she has several. She is an unhinged crazy woman. But who are they? Madonna? The medical profession? Why is it that even if Gwyneth Paltrow went on live television and unfurled her twenty meter-long enemies list, I would still feel that she was Hiding Something, or that she was holding back on a damning final judgment. What do we really know about the inner life of famous Libra Kim Kardashian? I would not feel confident in making a single assertion as to what kind of person she is, except for “very famous.”

How is it that they give so little away? They are like Aquarians in that they have the power of making you talk and talk and reveal several highly compromising secrets about yourself, and then at the end of the conversation you realize that they have said nothing similarly shaming, and that they are going to go home and write something accurate and devastating about you in their diaries. They are not doing this to be nasty. They are doing this because it is what they always do: look at stuff, wait it out, and end up with a conclusion that is widely held to be the right one. Incredible.

It’s difficult for Libras at the moment, but they will endure.

1. Bye
2. How Do I Stay Motivated?
3. Sex Tips From Queen Elizabeth I
4. Please Do Accept “Weird Pitches”
5. A Note About The Hairpin
astrologyastrology-is-fakegwyneth-paltrowkim-kardashianlibrazodiac