Would You Rather Be The Last Days Of Summer Or The First Days Of Fall? 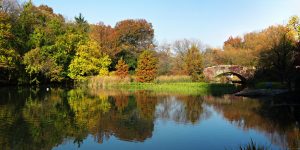 Here’s a pretty knotty question that, for the sake of honesty, was originally going to be “would you rather be the last days of summer or the last days of your life” before the author decided that this pairing might be a bit dramatic and a little too, uh, flip. Would you rather be the last days of summer or the first days of fall? Hmm. It’s a reasonable question, yes, but it’s difficult because there are pluses and minuses with each option. Maybe you’re a summer person and you’re upset about my asking the question in the first place. Well. I know it’s a little early to be invoking the end of summer, but this is the question I thought of, so. Here it is. Maybe you try to think of a “would you rather be” question, if you have such a problem with mine. Hm? Did you even notice that I do one of these every month and that they’re month-themed? I bet you didn’t. I bet you never thought about them much at all. They arrive, they pass through you, and you forget. OK. Maybe you should pay better attention to things if you’re going to be critical of them later. I do a lot for you and you don’t even notice. You don’t even care. It’s hard for me, knowing this. With the end of summer you get that end-of-summer sweetness, but with fall you get to usher in a crisp feeling of change—and isn’t that nice. A new beginning. Leaves crunching under your feet, college people headed back to school, your fantasy football team still potentially a league winner. A fresh start. We could all use a fresh start. One negative thing about the arrival of fall is that it could potentially enliven within us a sense memory of last fall and the things that happened then. Yikes. That’s not good. “End of summer” is the last seasonal time we have left, really, memory-wise, before you know what. Our last pure seasonal sense memory before we were drained of our will, etc. Before we thought we were at the end but actually we were at the end in a different way. That’s certainly a check in the “end of summer” column. Honestly, I wouldn’t blame you if that made the decision for you. I should have mentioned end-of-summer produce, etc., before I mentioned that part because now everything else sort of seems insignificant. But you do get to have tomatoes. You do get to swim in a pool, if you haven’t done that. You get to go to the beach one last time. You get to enjoy a long night before the nights get shorter and shorter until we’re living in permanent darkness. You get to wear your summer clothes and carry a hoodie in your bag in case it gets cold at night. There are a lot of good things on the “end of summer” side, besides the absence of a memory. Hm. This isn’t about me, but I’m still leaning toward fall, I think. I think you still have to believe good things can come, like sweaters. Maybe you’ll get a new sweater you like. You’ll get to walk around drinking coffee in your sweater. Reading a book around fall foliage. Maybe something exciting will happen to carry you through winter; you don’t know. A new romance. A new job. A new baby, though for that one you probably would’ve seen it coming. It’s possible. Everything will feel new again before it feels old again. And it’s nice to live in the newness, while you can. Let summer go and embrace fall smells, etc.  But also it’s nice to savor endings. The last whiffs of light before the darkness creeps in. 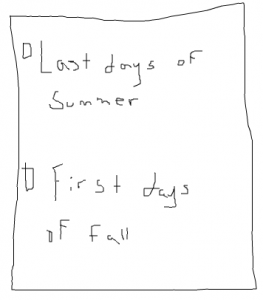 1. Bye
2. How Do I Stay Motivated?
3. Sex Tips From Queen Elizabeth I
4. Please Do Accept “Weird Pitches”
5. A Note About The Hairpin
for me it's the fall one