If A Spoon Album Leaked, Would We Listen To It? 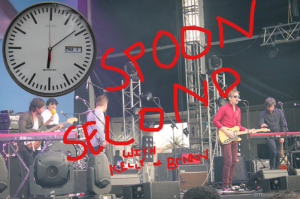 If a Spoon album leaked, would you listen? Could be a good Spoon Second topic @kellyconaboy

Kelly: If a spoon album leaked, would you listen to it?

Brian: Absolutely. Because I know I’m gonna buy it anyway and tickets to all of their shows nearby

Brian: Are you saying you wouldn’t

Kelly: No, I like saving things for a surprise.

Kelly: Having “something to look forward to,” to quote Spoon.

Kelly: Though when Ga Ga Ga Ga Ga came out I was an intern at a music blog and was given an advance copy, which I listened to.

Brian: I got an advance copy of hot thoughts

Brian: So did you!

Kelly: Yeah, I listened to that one early, too.

Kelly: But in an alternate universe where we were not Spoon experts whose opinions were needed in advance

Kelly: I would save it

Kelly: For a treat

Brian: I’m gonna listen to it a billion times and pay for it many times over. Why wait

1. Bye
2. How Do I Stay Motivated?
3. Sex Tips From Queen Elizabeth I
4. Please Do Accept “Weird Pitches”
5. A Note About The Hairpin
spoon second fan questionsspoon-second