How Do I Set Goals And Still Like How I Am Now? 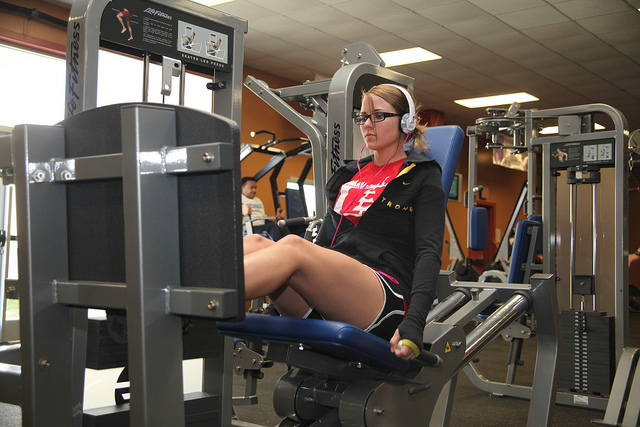 I’ve literally never exercised in my life. Partly because I was slightly traumatized by bullies in elementary school who made me fun of how I ran, and partly because I never “needed” to before. I was underweight through high school and college. Now I have a free gym membership conveniently coinciding with the realization that I’m getting older and I’m going to have to use it if I want to be healthy.

So I have two questions 1.) Where the hell do I start with an exercise routine? Most of the thing people suggest as “fun” forms of exercise sound like torture to me (no, I will not take a dance class, and I loathe competition). Just being inside a gym intimidates me. Everyone seems to know what they’re doing except me! 2.) How do I make fitness goals without focusing on what’s wrong with me now? I’d like go back the size I was a year or so ago, but I also don’t want to keep reminding myself of what I don’t like about my body now. I want to be healthy and I don’t want to focus on the vanity more than what really matters.

Damn, I know this feel. We live in a weird world where we are supposed to be totally comfortable and content with who we are, but we’re also supposed to not “settle” and also strive to be “our best selves.” It is a) impossible to resolve this tension but also b) they are two different pieces of advice for different people. People who feel stagnant need to think more deliberately about what they want out of life; people who never stop thinking about it need to slow down and chill. You sound like the former, at least in this respect.

Not focusing on your appearance sounds like a great start, so let’s not focus on it. Give yourself a chance to love or at least appreciate your body for what it can do rather than what it looks like. What I’ve learned in the last few years of lifting is that bodies are absolutely sick at getting stronger. Your biology is literally designed for this purpose. I always thought whatever muscles I had I was pretty much born with, but I also somehow thought that even touching a weight would make me look like I was on steroids (as you may have noted, this doesn’t make sense at all). As it turns out, you can appreciably affect how strong your are and your body composition with just some consistent effort, and that doesn’t mean you have to be wider than you are tall, or even close.

Is there anything you’ve ever wanted to be able to do, physically? A handstand? A pullup? The dance from the “Sorry” video? Climb a rock face? Row the English Channel? Swim the English Channel? Do American Ninja Warrior? This is a good method for getting a long term event-based goal. If you can work one of these up, you want to make some process-based goals to get you there. If you can’t think of one, that’s fine! To start with just wanting to get settled with a simple routine is a fine goal.

As far as exercise sounding like torture, good, skill-augmenting exercise, i.e., Training, should be hard; if it were not hard it would be called relaxing funtime. That said, some things may just not be your bag—I’ve never done a cardio class I’ve really liked and would spend money on on a regular basis. Many people love them! But I also think many people suffer through them because they feel like they have to, and there are other ways.

It seems worth pointing out to you specifically that there DO exist classes that are oriented around building skills, and not just running your ass around in circles for an hour. This will kill two of your birds with one stone—you can set yourself up in a situation with other beginners so that you don’t feel intimidated by others who seem to know what they’re doing, AND you will be learning to do something that will help you achieve your goal. Many gyms offer, for instance, beginner strength-training or powerlifting or weightlifting classes. You might find a beginner rock-climbing class at a rock gym, or a beginner gymnastics or circus skills class. There is pole-dancing, trapezing, MMA, Krav Maga, sword-fighting. Try to think about classes in terms of gaining skills, rather than an exercise session.

If you really don’t want to do any kind of class, I will plug strength training specifically—it will not make you bulky, for God’s sake; and unless you are quite strong already, which it sounds like you aren’t, it will have carryover to every single goal I listed above. Many people are surprised by how easy and simple starter weight training is—3 or 5 sets of 5, 3 movements per workout, three times a week. That’s all it has to be. Your body actually doesn’t need a lot of frenetic stimulus, like a billion HIIT intervals or hours of cardio or back to back SoulCycle classes, in order to get stronger and get a workout, and it’s actually better if you invest your time wisely with a few good movements rather than trying to do too much. If you make your goal to just show up 3 times a week and do 3 things, that feels pretty achievable to me as an onramp. I like having a lifting program because it doesn’t vary a ton, and it’s built around the same handful of movements and I don’t have to really learn anything new; I just make tweaks to what I’m already doing.

I know it seems like everyone at the gym knows what they’re doing, but they all started where you were at some point. It won’t take you long to feel like you know what you’re doing, too; you just have to give yourself a few sessions to learn. This feeling won’t last, I promise you. Try to go to your gym when it’s the least crowded, at least for your first few times, like early in the morning or at lunch (you won’t need very long, like 30 minutes or so) or late at night; whatever you can swing. When you can focus on getting your own rhythm and don’t have to worry about other people “needing” to use your equipment “more” than you, you will have a little more space to get comfortable. Once you feel like you know what you’re doing you will feel a lot more comfortable running with the big dogs in the after-work rush.

1. Bye
2. How Do I Stay Motivated?
3. Sex Tips From Queen Elizabeth I
4. Please Do Accept “Weird Pitches”
5. A Note About The Hairpin
ask-a-swole-womanexercisegoal settinggoalspowerliftingroutinetrainingweight training